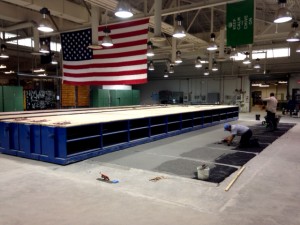 Western Storage and Handing (WSH) helped solve an ergonomic and space efficiency problem for the United States Army Special Forces Group at Fort Carson, Colorado, was facing an ergonomic and space efficiency problem in its parachute rigging and repair facility. The facility had limited floor space to fold its extremely large parachutes and also required storage capacity for packed parachutes. In addition to the facility’s layout concerns, there were ergonomic concerns for the soldiers that inspected and folded the parachutes. 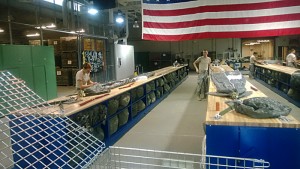 “The US Army 10th Division Special Forces had to have a system that would allow them to independently fold and inspect up to five parachutes at any time and be able to quickly convert the area to be able to fold ultra large parachutes,” says Western Storage and Handling Storage Specialist Jim Murray. “The entire work area needed to include a floor surface that would be comfortable for the personnel involved in the parachute inspection and folding. These people can be on their feet for 8 to 10 hour shifts.” 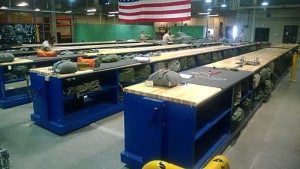 “We were able to search through our archives and found a case study that Borroughs had done for a marine base in San Diego’s parachute rigging operation,” says Western President Harry Neumann. “We showed Fort Carson the pictures from that project and introduced them to the idea.” 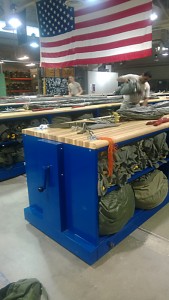 The challenge for Western was that 90 percent of the time, the parachute rigging facility was folding smaller, man-size parachutes.

“All of the personnel chutes are folded on tables, with aisles in between,” says Neumann. “But sometimes they fold large parachutes that are used to drop 2,500 pound containers into battle areas and when that happens, they need a large amount of floor space.”

To accommodate both needs, Western proposed using Borroughs steel shelving mounted to the Borroughs Aisle-Saver mobile aisle system with a Wisconsin Bench Maple Butcher Block work surface mounted to the top of the shelving at a comfortable working height. This would allow the shelving to act as table tops while folding personnel parachutes but the mobile aisle system would allow the shelves to be easily slid out of the way when the time came to pack the larger container parachutes. The folded and packed chutes were then stored in the shelving under the work surface.

The tracks of the mobile shelving, though, presented some logistical challenges. 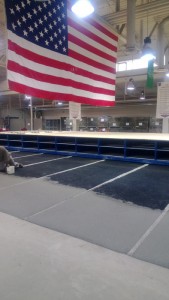 Laying out the tracks for the mobile aisle shelving system

“The existing floor was concrete and irregular,” says Neumann. “We laid out the tracks for the mobile system and in some areas the tracks raised 2 inches above the floor and in others just ¾ of an inch. It was a tripping hazard for people working in that area.”

To deal with the ergonomic issues that the soldiers already faced from spending so much time standing on the concrete, Western learned that the Army was already planning to put anti-fatigue matting in the area. But since the floor needed to be leveled anyway to prevent tripping over the mobile aisle tracks, the Western team had an idea.

“We did some additional research and found a surface that is used in outdoor playgrounds and gymnasiums called Vitriturf Cushioned Seamless Flooring,” says Neumann. “It’s a rubber compound mixed with an epoxy that is put down with a half inch surface laid over the top so that it ends up resulting in a nice, durable, cushioned floor surface.”

This solution not only solved the base’s ergonomic concerns but it also leveled the floor to prevent personnel from tripping over the mobile aisle tracks.

The Install and Result

With a solution in place, Western began to install the products. However, due to the sometimes classified nature of the base’s work, installation proceeded at a pace governed by the soldier’s mission schedule. 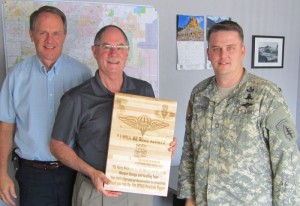 “Sergeant Doris would let us know when they had critical missions coming up and when our crew couldn’t be in the facility,” says Neumann. “Between the time it took for products to arrive and working around their mission schedule, installation took about four months.”

However, there were some challenges that arose during the installation process that were efficiently resolved. 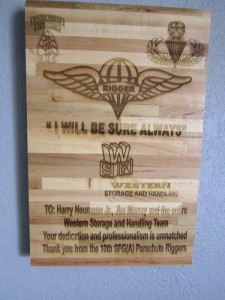 “There were some mechanical and fabrication issues that we ran into during installation,” says Neumann. “We had to go out to the base two or three times with our installation crew to address issues that came up when they started to use the system. We had some operational issues that came up, but we never told them we couldn’t handle it. We were very responsive, as were Borroughs and Wisconsin Bench, in addressing those issues.”

He goes on, “That’s what really impressed the folks at Fort Carson and earned us that plaque. They said our willingness to stay with it and make sure that the project was finished to their satisfaction was most impressive.”