Columbus Hydraulics Company in Columbus, Nebraska, had positions that needed to be filled and WHS helped provide the space they needed.

Columbus Hydraulics Company in Columbus, Nebraska, is a family-owned hydraulic cylinder manufacturer that employs more than 100 employees. The business was expanding and the company needed to hire four additional administrative staff members to accommodate the additional business. The issue, however, was that there was nowhere to put this additional staff in any of Columbus Hydraulics’ five buildings. They were at their limit in terms of office space for administrative staff. This presented a dilemma for the company, as these were necessary positions that needed to be filled and these new staff members had to have an office, and WHS helped provide the space they needed. 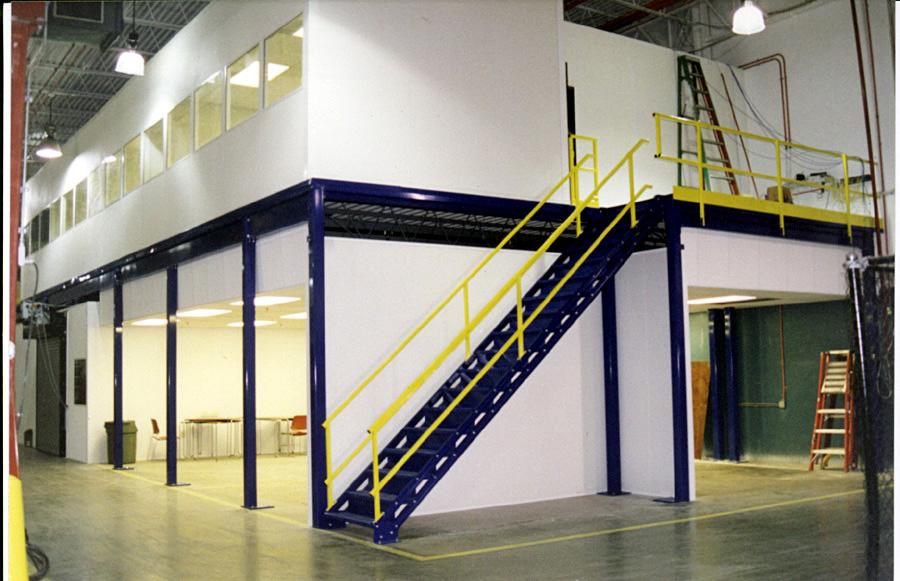 The company began to search the Internet for potential solutions to their space crunch and eventually got the idea to install a mezzanine with modular offices on top. They contacted a mezzanine supplier who turned to Harry Neumann, President of Western Storage and Handling (Denver, CO).

“I flew out to Columbus and surveyed the area and developed parameters that would include everything they were looking for,” says Neumann. “We put together a budgetary number and then about three months later their budget was approved and we firmed up a proposal.”

The company had a large lunch room in the production area that they felt would be perfect for a mezzanine and modular office solution. However, they needed Neumann and his team to come in to determine the feasibility of their idea and also get input on stairway layout and addressing any building code issues that might arise.

“We knew that these four new employees needed to be brought into the operation quickly, so once we got the final approval we had to move fast,” Neumann says. “They had an area that had previously been a lunch room area with nothing over the top. We proposed building a mezzanine in that empty area and then putting offices on top with a fourth office in half of the area below the mezzanine. This left the other half as their lunch room area.”

This solution would solve Columbus’s space crunch but presented its own installation challenges.

“Normally with a modular office in a warehouse you can put a wall-mounted HVAC system in and essentially it pulls air in from the warehouse and treats it and brings it into the office. In this case, we actually had to have holes cut into the exterior walls to have the HVAC units suck outside air into the office. That was something we had to do after the initial design phase.”

In addition to the HVAC, WSH’s installers also needed to cleanly build the mezzanine and offices around existing support columns in the building. It was important to the customer that the design look very clean so WSH had to actually box the office walls around the building structure. There were also air lines, water lines, gas lines and other existing infrastructure that had to be addressed. Some of it needed to be moved and some eliminated altogether to make the design work. What was most important was ensuring that there was enough electrical capacity to handle the pre-wired electrical system for both office areas.

Initial planning on the project took two trips to Columbus on Neumann’s part and about five weeks total. Installation took just two weeks. However, once the installation was complete, Columbus had a change that they wanted addressed.

“After it was installed, the owner came out to the area and decided that he wanted the lower office to be bigger and wanted a vestibule area next to an exterior door,” Neumann says. “Basically we had to redesign that area and make a number of changes. Because of the modular design, we were able to do this in a matter of a couple of weeks and we were able to send our crew back to finish the lower office.”

In all, Columbus Hydraulics was very happy with the outcome. Not only were they able to accommodate their four new employees but they were able to do so without dealing with all of the different trades associated with stick construction. The modular design of this solution allows Columbus Hydraulics to relocate the system as well as depreciate it at the same rate as warehouse equipment. Western Storage and Handling was able to handle the project from design to completion without any interruption to Columbus Hydraulics’ business.

Please contact us if you have any questions or need assistance with your project.  We will have the right solution for you – whether it’s simple equipment or a customized system.